We are looking to turn the butt into an item of value! 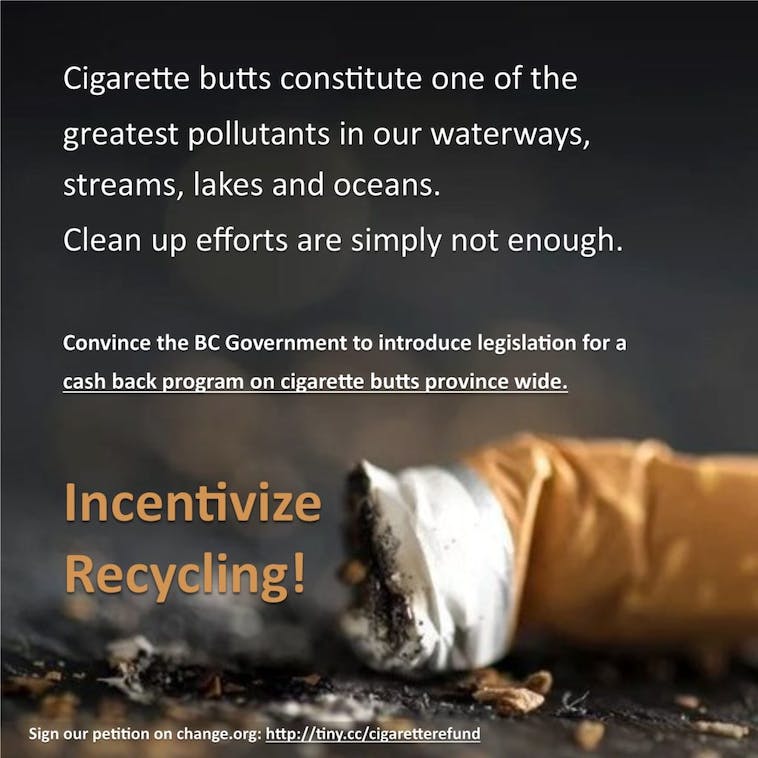 If we incentivize users to return their cigarette butts opposed to littering or throwing them in the trash, we will increase the chance of the butt to be properly extinguished, stored and returned for recycling! Over 1.6 billion pounds of cigarette waste ends up in land fills where it cannot properly decompose causing negative effects to our environment and potentially poisoning animals and contaminating our ocean, lakes and waterways.

On Saturday, we attended an event for cigarette waste to be collected and properly recycled. One person happily donated two trash bags full of butts which thankfully will now be kept out of the landfill! We would like the Government of BC to encourage more users to follow suit through a refund system like a bottle depot; for every pound of butts returned users would receive a deposit back, as they would for cans and bottles. Help us incentivize British Columbians and help our cities reduce spending on cigarette clean-up. Check out our change.org petition and please share this post!

More information on the impact of cigarette butts:

When providing any accommodation, service or facility customarily available to the public, the provincial Human Rights Code normally prohibits one person from discriminating against another because of the other person’s age or family status, unless there is a bona fide, reasonable justification.1 But, the Strata Property Act specifically permits a strata corporation to pass an age restriction bylaw.2 A strata corporation may enforce its age restriction bylaw against any resident, regardless whether he or she is an owner or a tenant. If a strata 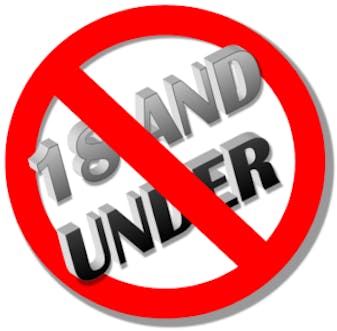 corporation passes a new bylaw restricting the age of persons who may reside in a strata lot, that bylaw, once registered at the Land Title Office, will not apply to any person residing there when the bylaw was passed and who continues to reside there.3

Whether acting as listing or buyer agent, the Real Estate Council of British Columbia expects a REALTOR® to review a strata corporation’s bylaws for restrictions, including age restrictions.4 One must never assume from signage or advertising alone that a strata corporation is age restricted. Conversely, one must never assume from the presence of children that they are permitted in a complex.

Copyright British Columbia Real Estate Association (BCREA). Reprinted with permission. BCREA makes no guarantees as to the accuracy or completeness of this information or the currency of legal information.

Before celebrating, it would be prudent to assess the structural state of your roof. You should check relatively quickly as some home insurance policies only will cover you if the damage is reported within a relatively short time frame (some policies have a 6 months maximum time for reporting damage) and some may not be visible from the exterior until much later. As the snow melts an ice dam may form and lead to moisture penetrating the inside walls.

Canada requires roofs to handle a minimum snow load of 21 pounds per square foot. This averages out to about 2-2.5 feet of packed snow! After our little blizzard, some homes could have this much snow piling up. As the rain comes and the snow becomes wet, the weight on the roof will increase. 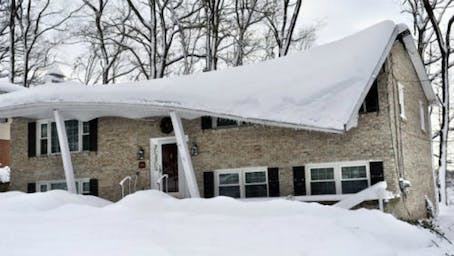 If you noticed any of these signs below, your roof could be in danger of collapse.

An ice dam is a ridge of ice that forms at the edge of a roof and prevents melting snow (water) from draining off the roof. The water that backs up behind the dam can leak into a home and cause damage to walls, ceilings, insulation, and other areas. When the meltwater reaches the frozen surface, ice accumulates, gro 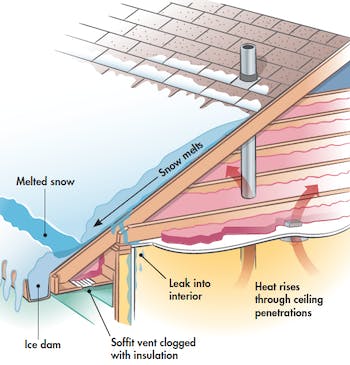 wing a barrier that impedes further passage of meltwater off the roof. Ice dams may result in leaks through the roofing material, possibly resulting in damaged ceilings, walls, roof structure and insulation, damage or injury when the ice dam falls off or from attempts to remove ice dams.

A note on snow removal:

“Snow should be cleared in a cross direction to the roof trusses, Brideau said. “This will reduce the stress on all the trusses at the same time, rather than reducing stress from only one truss.” Drifted snow should be removed first. (On multi-level roofs, this will be on the lower roofs). “And it’s extremely important to remove snow evenly from both sides of the roof to avoid concentrating a load in one area. Failure to follow these steps could cause enough stress to the roof to cause it to collapse. Completely remove the snow from the roof as you clear it.” Brideau also advises caution when removing snow from one section to avoid travelling over and compacting snow on adjacent sections.” (WorkSafeNB).

Be careful out there! Protect your home and yourself, hire a licensed contractor to help you with any home maintenance and especially when it comes to your roof.

If you are thinking about removing the snow from your roof yourself check out this tool. It protects the shingles on your roof and allows removal from the ground. A much safer option!

Coverage for ice and snow damage can vary depending on your insurance plan. We recommend checking your policy if you have concerns and/or questions about your coverage and how to claim. We recommend everyone to inspect their roofs and trusses to ensure their homes survived #Snowmageddon2019

Contact your local insurance company and/or the links below for more information!

How much is the tax?

Now that you know some basic information on the tax, this is what you need to do in order to exempt yourself from the tax:

Register your property by March 31st, 2019 by phone or online using the information you will receive in the mail sometime in February.

Other information on the Speculation and Vacancy Tax

·        The speculation and vacancy tax is distinct from the empty homes tax in the City of Vancouver.

·        You can pay the tax using the Government of BC’s online payment system, through your personal financial institution, by cheque, or in person at a Service BC Centre.

In the wee hours of January 23, 2018, the Department of National Defense (DND), local municipalities in the Capital Regional District (CRD), as well citizens who had subscribed to their local emergency notification systems, received an alert that a large earthquake had occurred in Alaska and that a tsunami warning was in effect for low lying areas close to the waterfront. Several hours later, another notification was sent to cancel the alert and inform the residents that the warning was no longer in effect. Many people were reported gathering at the top of Mount Tolmie, Mount Doug, Dean Park and many other high altitude points.

In the days that followed, a lot of questions were raised, particularly regarding the lack of a cohesive response (Vic Alert, Sidney Emergency & other municipalities’ notification system subscribers were notified while others were not). The CRD and DND made the decision to monitor but not alert the residents while other municipalities had alerted residents. No sirens or alarms were sounded. 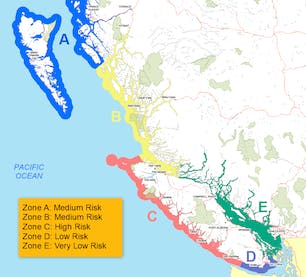 In many ways, this event will serve us as a real life, practical experience to develop better, more centralised and cohesive systems that help alert residents and visitors in a consistent manner, as well as develop clear strategies in terms of public messaging (i.e. who needs to evacuate and who does not).

Indeed, the lack of easily available information and public education on tsunamis and the risks that they pose in our region is astounding. Disappointingly so, when so much great research and modelling has been performed by some of the regions top scientists.

Many of the people who decided to flee to Mount Tolmie or Mount Doug had the vision of a blockbuster-movie-like 300 meter plus wave towering over Victoria and crashing down to wash everything in its path out to sea.

If more information had been disseminated and public education had been an essential component to earthquake preparedness for our region, many residents could have avoided the unnecessary stress of imagining the doomsday monster wave wiping Victoria from the map. Not to underestimate the potential damage and catastrophic impact of a tsunami wave to much of the Vancouver Island’s West Coast; however, generally speaking, if you live in the CRD, the risk is low (either Zone D rated as low or Zone E rated as very low). The highest predicted wave for the region is for Port Renfrew, estimated at a maximum of 3.5 meters – far from 300 m. Other areas such as Port Alberni, Tofino, and Ucluelet are exposed to a much higher risk (Zone C).

The Science & Data We Do Have

Tsunamis and their intensity/threat level depend on several factors:

As mentioned earlier, a lot of event modeling and science has been performed over the past 15 years in order to give us as much information as possible. Some of the most interesting pieces of information are obtained from studying historic events of large quakes and tsunamis in the region, which hold a lot of crucial information to guide us. How do we know? Well, paleo tsunami deposits are an incredible source of data in the Pacifica Northwest. This information, combined with bathymetry (measurement of ocean depths and contours), as well as land topography, can give us valuable data to build complex modelling of a tsunami hitting our coast. The CRD obtained a really great modelling report for the region. If you have the time and interest, we highly recommend you read it:

Be Proactive & Inform Yourself: Arm Yourself With a Plan

There is no question that our province and our local governments have been under scrutiny when it come to the handling of the recent events. There is a lot of room for improvement to develop a cohesive approach in alerting and informing everyone. We expect that this latest occurrence will trigger new and improved strategies. We are also hopeful that public education will play a more prominent role as a crucial element to risk management. That being said, there is a lot that YOU can do so that you are informed of the risks in our region (or on the Island’s West Coast). Develop a plan so that you have mentally prepared yourself in the event of another alert where the risk is greater than the January 2018 alert. Check out BC’s Earthquake and Tsunami Smart Manual, below:

Disclaimer: This article must not be relied upon as an official & current source for emergencies. Information sources were used from the Province of BC as well as from CRD information pamphlets, materials and research. All information contained herein is subject to change.

We are excited to share with you our new Pacifica Lifestyles blog where we will be sharing all kinds of local stories, experiences and things to do in our region. We will post on a regular basis about topics that celebrate why we love to live where we do. We’d love for you to become one of our readers! 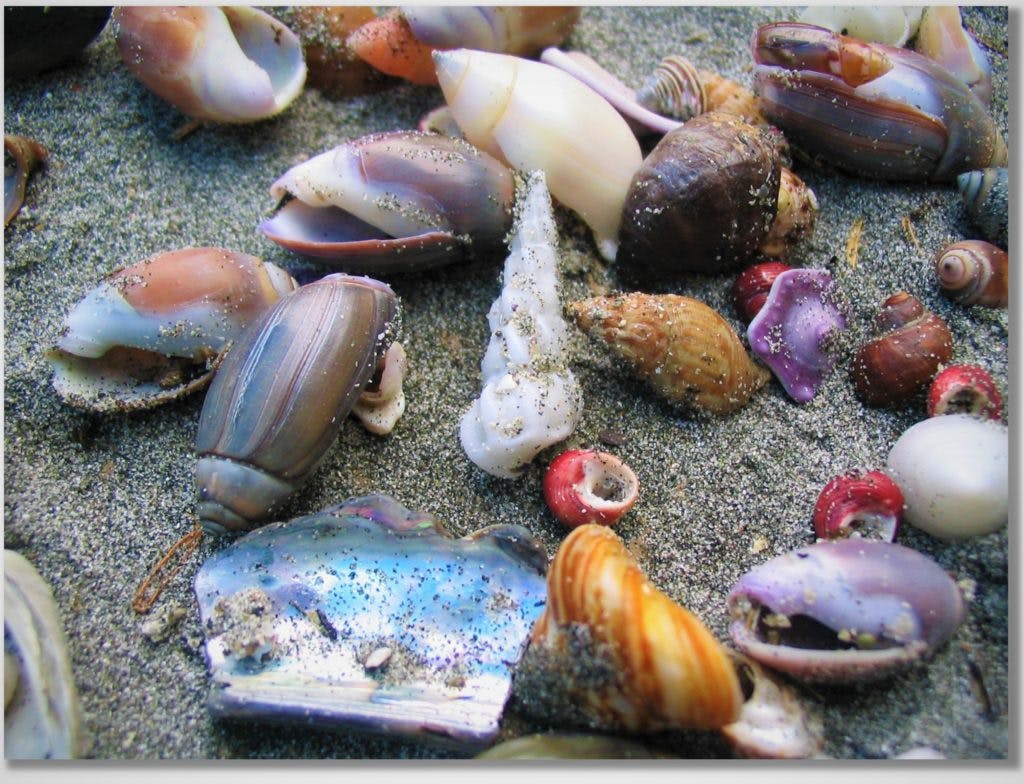